Only Too Much Is Enough: Francis Bacon In His Own Words 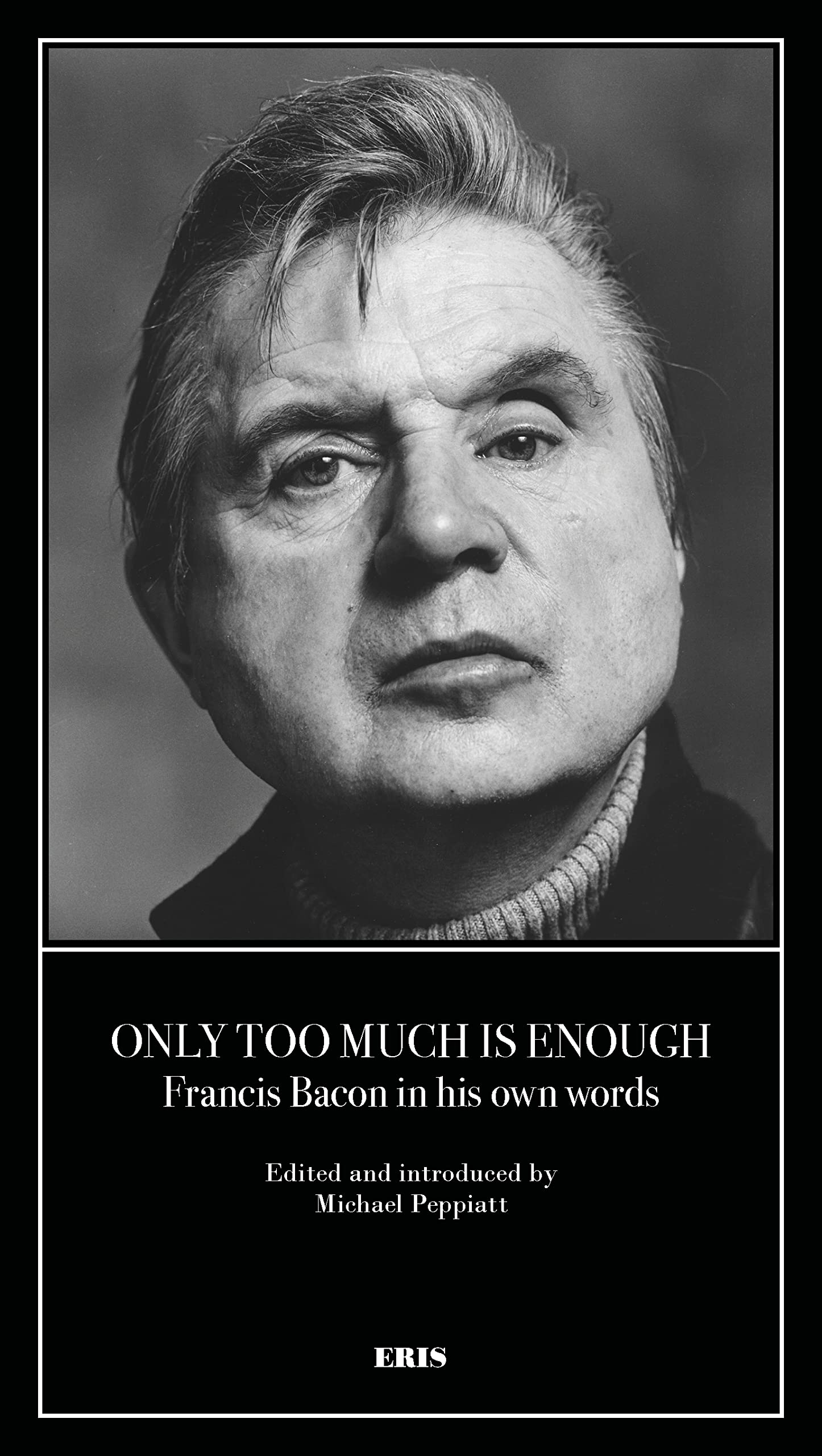 Francis Bacon’s conversation was by turns witty, provocative, and profound. In gathering together Bacon’s most memorable aphorisms, Michael Peppiatt—a friend of the artist and co-curator of the Royal Academy of Arts’ exhibition Francis Bacon: Man and Beast (19/1–17/4 2022)—evokes both the force of his personality and the range of his interests.

The sayings assembled for the first time in Only Too Much is Enough form a brilliant accompaniment to Bacon’s paintings, conveying as they do not only a sceptical and sometimes disquieting outlook on human relationships, but also keen insights into the creative process.

The book is available online from Eris Press and Amazon UK.

Francis Bacon is considered one of the most important painters of the twentieth century. A major exhibition of his paintings at the Royal Academy of Arts, planned for 2020 but postponed because of the pandemic, explores the role of animals in his work – not least the human animal.

In this fascinating publication – a significant addition to the literature on Bacon – expert authors discuss Bacon’s approach to animals and identify his varied sources of inspiration, which included wildlife photography and the motion studies of Eadweard Muybridge. They contend that, by considering animals in states of vulnerability, anger and unease, Bacon was able to lay bare the role of instinctual behaviour in the human condition.

The book is available online from Royal Academy of Arts and Amazon UK. 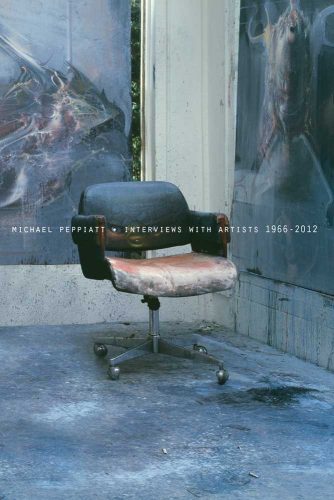 A renowned curator and respected insider of the international art scene since the mid-1960s, Michael Peppiatt has spent his professional life with many of the greatest artists of the 20th century. His close friendships and frequent studio visits with Dubuffet, Sonia Delaunay, Francis Bacon, Henry Moore, Balthus, Oldenburg, Brassai and Cartier-Bresson, among many others, have produced an incredible archive of interviews, from formal question-and-answer sessions to off-the-cuff conversations.

These interviews combine to give a unique perspective on art from the Second World War to the present day. Peppiatt has selected forty-five of the most noteworthy and fascinating of his conversations with artists, from the world-famous to the under-recognized. The author approaches his subjects with a characteristic mix of passion, insight and humour in a book that is consistently entertaining and informative, as the artists open up in unexpected ways about their work and their lives.

The book is available online from Yale University Press and Amazon UK.

“Many of the conversations published here have a spark and intimacy that allow unexpected insights into the lives and work of some of the 20th century’s greatest artists.”—Apollo (Off the Shelf)

“The art of the critic-interviewer is, like that of the psychoanalyst, to draw poignant attention to what it is that the interviewee cannot express. The limitations imposed on Peppiatt are those of language itself, and they serve him well, causing him to nudge each of his subjects to the point where words fail them, to where the picture, the sculpture, the building or the photograph becomes the only means of expression.”—Talitha Stevenson, The Observer

“This fine collection of interviews from almost five decades moves from the figurative painters of London – notably Bacon and Auerbach – to artistic Paris, including the photographers Brassai and Cartier-Bresson. Some interviewees are little known to the British public, some world-famous, but the focus is always on the individual, as a good interview ought to be.”—Martin Gayford, RA Magazine

“Peppiatt is a soft but probing interlocutor, and his enthusiasm for his subject gleams from every page.” Lucy Davies, Sunday Telegraph

“How much do we learn about an artist’s work by reading their own words? Does an interview simply illuminate the personality rather than the work itself? These questions are addressed by Michael Peppiatt in his introduction to this collection of 41 interviews. [Though he] reminds us to never trust what an artist says about their work… he has no wish to catch artists ‘off their guard’… Peppiatt’s list includes the painfully taciturn and the fiercely articulate.” Fisun Guner, Metro

“The 40 interviews here are by turns chatty, revealing, formal, informal; all retain a vivid sense of a social encounter. Although this book is perfect for dipping into at leisure and at random, taken together, Peppiatt’s accounts provide a gripping overview of an epoch.” Jackie Wullschlager, Financial Times

“As a friend of many of those he interviewed, Peppiatt has been in a privileged position to gauge the trends of the last half century, and his passion for these artists, as much as for their art, is self-evident… The book has the feel of a collected biography, sufficiently steered by the masterful interviewer to give shape to the raw honesty it reveals… Simply conceived and, but pleasurable to pick up, interviews with Artists is a lot more than an aging critic’s memoirs.” Daisy Dunn, telegraph.co.uk

The Making of Modern Art

Covering the whole spectrum of modern art—from pioneers such as Gustav Klimt and Chaim Soutine, to collectors and dealers who played a pivotal role in the modern art world, to artists such as Francis Bacon, Bill Jacklin, and Frank Auerbach.

Each text is accompanied by a new short introduction, written in Peppiatt’s signature vivid and jargon-free style, in which he contextualizes his writings and reflects on significant moments in a lifetime of artistic engagement.

The book is available online from Yale University Press and Amazon UK.

“Peppiatt is always worth reading and there isn’t a dud in this stimulating collection.” – Andrew Lambirth, The London Magazine

The Existential Englishman is both a memoir and an intimate portrait of Paris ­- a city that can enchant, exhilarate and exasperate in equal measure. As Michael remarks: ‘You reflect and become the city just as the city reflects and becomes you’. This, then, is one man’s not uncritical love letter to Paris.

Intensely personal, candid and entertaining, The Existential Englishman chronicles Michael’s relationship with Paris in a series of vignettes structured around the half-dozen addresses he called home as a plucky young art critic. Having survived the tumultuous riots of 1968, Michael traces his precarious progress from junior editor to magazine publisher, recalling encounters with a host of figures at the heart of Parisian artistic life – from Sartre, Beckett and Cartier-Bresson to Serge Gainsbourg and Catherine Deneuve. Michael also takes us into the secret places that fascinate him most in this ancient capital, where memories are etched into every magnificent palace and humble cobblestone.

On the historic streets of Paris, where all life is on show and every human drama played out, Michael is the wittiest and wickedest of observers, capturing the essence of the city and its glittering cultural achievements.

“If you’re interested in art, or writing, or Paris, it will ring bells in your head. I loved it” – William Leith, Evening Standard

“Peppiatt’s account of his bohemian life in Paris is full of colour, character and charm … Peppiatt has an aesthete’s love of life, and there are vivid descriptions of food, drink and romance here that both enrapture and inspire. This enjoyable book works best as an account of a lifelong love affair with the Parisian streets … The Existential Englishman offers elegant proof that Michael Peppiatt’s powers of observation remain undimmed and acute” – Alexander Larman, Observer

“A vivid memoir of Paris through the decades, this very personal account of the French capital brings its places and people alive” – The Connexion, Editor’s Choice

The Arts Desk, The Art Newspaper, The Australian Book Review, The Connexion, The Guardian, The Observer, London Evening Standard, The London Magazine, The Literary Review, The Daily Telegraph, The Sunday Telegraph, The Times, Times Literary Supplement, The Spectator, The Financial Times, The Oldie and Winged Words

Francis Bacon In Your Blood: A Memoir 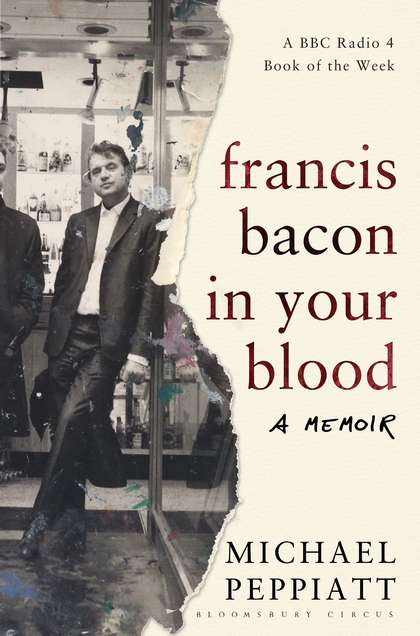 Michael met Francis Bacon in June 1963 in Soho’s French House to request an interview for a student magazine he was editing. Bacon invited him to lunch, and over oysters and Chablis they began a friendship and a no-holds-barred conversation that would continue until Bacon’s death thirty years later.

Fascinated by the artist’s brilliance and charisma, Michael accompanied him on his nightly round of prodigious drinking from grand hotel to louche club and casino, seeing all aspects of Bacon’s ‘gilded gutter life’ and meeting everybody around him, from Lucian Freud and Sonia Orwell to East End thugs; from predatory homosexuals to Andy Warhol and the Duke of Devonshire. He also frequently discussed painting with Bacon in his studio, where only the artist’s closest friends were ever admitted.

The Soho photographer, John Deakin, who introduced the young student to the famous artist, called Michael ‘Bacon’s Boswell’. Despite the chaos Bacon created around him Michael managed to record scores of their conversations ranging over every aspect of life and art, love and death, the revelatory and hilarious as well as the poignantly tragic. Gradually Bacon became a kind of father figure for Michael, and the two men’s lives grew closely intertwined.

Francis Bacon in Your Blood: A Memoir was chosen Radio 4’s ‘Book of the Week’ and by The Sunday Times as its Art Book of the Year.

Adaptations were published in The Daily Mail (HERE and HERE), and Michael was interviewed in The Telegraph and the Fundacio Tapies. Additional articles appeared in The Guardian, The Sunday Times and Christie’s Magazine. A series of extracts were broadcast on Radio 4 from 24th to 28th August read by Adrian Scarborough. The Omnibus edition of these readings is available HERE.

Michael has spoken at various venues including Ilkley, Bath, Dublin and Ely. He also gave a talk at Christie’s New York on 19 January 2016. Michael also read from Francis Bacon In Your Blood on 14 September at 7pm at Westminster School and at the Oxford and Cambridge Club Literary Lunch on 15 September.