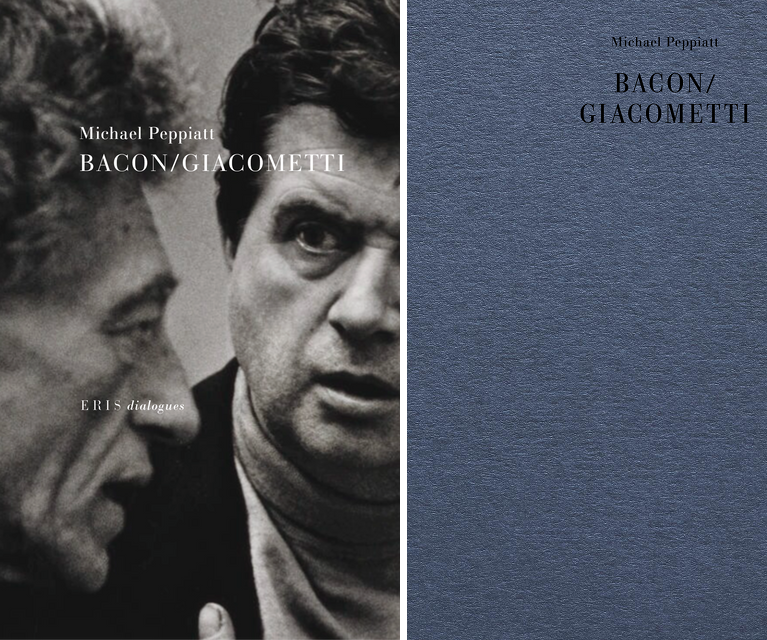 Eris Press have released ‘Dialogue’ for the first time in its original version. Michael wrote the ‘Bacon/Giacometti’ Dialogue while he was co-curating an exhibition of the same title at the Fondation Beyeler in Switzerland. It has since been published in French by L’Echoppe in Paris and put on as a play by Christie’s in London.

For more details and to order a signed copy, visit their site here, or read on for an extract:

GIACOMETTI Is it true, Francis, that when you raise your glass, you always say, “Champagne for my real friends and real pain for my sham friends”?

BACON That’s just an old Edwardian toast people used to use. But since I spend so much of my life drifting from bar to bar and person to person, I do say it from time to time. It seems to sum up the situation so clearly. And after all, Alberto, what else is there to do in life but try to sum the situation up clearly?

GIACOMETTI Yes, of course. That’s the only point of anything, and certainly the only point of art, no? I think the aim is to create a kind of residue of reality, not to reproduce reality as such, which is impossible, but to create a reality of equal intensity—its essence, if you like. It’s also a way of trying to give existence some form of permanence. Of course you never achieve that. However much you try, you always fail, time after time. And you’re bound to fail, because that intensity is always out of your reach. You might think, every now and then, that you’ve got a little closer, so you keep on trying. And here’s the contradiction: nothing would be worse than succeeding, because if you did there’d be nothing left to do!

GIACOMETTI I love being in London. I don’t know why I don’t come over more often, and not just to hang a big show like the one at the Tate or to go and look at those fantastic early Egyptian paintings you have at the British Museum. I am in awe of them because they are so life-like and real. And London is so completely different from Paris. Everything looks different, even the trees in the parks. And the people! They seem to inhabit a different kind of space as they queue so calmly for the bus or make their way along the street. And then these secret little bars and clubs you’ve taken me to! It’s like a different planet.

BACON It’s terribly nice of you to say that, Alberto, but I always think Paris is so much more beautiful and stimulating than London. I mean, it often feels terribly provincial and dreary here, and there’s really not much happening in the arts. Not much happening in anything, come to that. I remember I always used to long to see the latest issues of Cahiers d’Art and those kinds of magazines simply to find out what was happening in Paris. What you were doing, what Picasso was doing…

GIACOMETTI Well, there’s your own work, Francis, which I find very exciting and inventive. I went to your gallery yesterday to see the new portraits you’ve done of your friends, and I have to say that, next to your paintings, which radiate vitality, my things at the Tate will look as though they’d been done by an old spinster!

BACON Alberto, nothing could give me greater pleasure than to hear you—who I consider to be the greatest living artist—say that about my work. I’m hugely, deeply touched. I’ve admired everything you do and your whole attitude towards life and art from the beginning. It’s not just what you’ve created, but the way you live. I’ve always been struck by those photos of you in your studio with all its marvellous mess strewn over the floor. I live in that way too, because I find having all that chaos around you stimulates ideas as you work. I’ve got so many photos and things piled up under foot that I think of it as my “compost heap”, and every time I walk up to the canvas I kick new images up and they act like triggers for ideas while I’m painting. And all the painters I see regularly in London, like Lucian Freud and Frank Auerbach, look up to you as the great figurative artist of our times. You’ve been a model for us all, particularly now that the art world is only interested in abstract art.

GIACOMETTI Me? A model? I’m no model!

BACON Do you remember, before Isabel introduced us, I saw you sitting at the Flore in Saint-Germain, it must have been in the early Fifties, and I felt I had to come over and say that for me you were the greatest living sculptor and draughtsman of our times.

GIACOMETTI And what did I say?

BACON “What terrible times we must be living in!”

Bacon signals for another bottle of Krug, while Giacometti lights yet another cigarette.